Many features are common to all mountain bikes : broad and strong wheels, sturdy frames, suspensions often wade the most difficult obstacles, straight handlebars … However, some features make it into the category has several typologies should be differentiated to choose the most appropriate to the activity we want to develop. Although the rates are very many (each slight variation seems to have generated a distinct class of machines) and there is controversy over how to call each formulation, have attempted to summarize and unify. 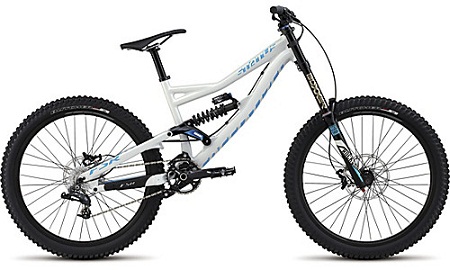 The more conventional, with mixed developments up and down slopes, comfortable suspension and fairly long journey. As should combine precise performance for each field have boxes that allow light but resistant to descend safely and at the same time, ascend without bursting. They are, in short, using most of those involved in mountain biking as a recreational activity.

In more advanced models one is mounted triple automatic and preset table telescopic situating the saddle at the right height for the terrain is put up or down. Also called ‘all mountain’ for its ability to adapt to any terrain, although some distinguished one and the other. At higher quality and resistance are called endure bikes.

Light, very manageable, are designed for maximum speed on moderately difficult terrain. They are not well suited for rocky or huge declines, because usually mounted finest wheels and dampers with less travel. Its role is similar to bikes cyclotrons races (in closed circuits of varying difficulty), although its robustness is undoubtedly higher and weight, consequently, too.

Perhaps the most extreme form of mountain biking. The theory is simple: down ramps, stairs or slopes with obstacles as fast as possible. To get it, usually mounted a few developments (sometimes only one dish) and very long, making them almost unmanageable on the climbs. In addition, the frame geometry is particularly wide and place the rider very tilted back, to promote stability. The suspension has a long journey to absorb shock on wheels more efficiently. This sport is also known by its English name, ‘downhill’.

There are numerous variations of the conventional models of mountain bike designed for various occupations. They are, for example, bikes dirt jumping , closer to the BMX and stunts that conventional machine mountain: have a single development and allow the rider kept very low, with the center of gravity closer to the ground to keep better balance. The trial bikes are perfectly adapted to overcome almost impossible odds and sometimes even mount a saddle, since the rider is most of the time standing; closely resemble those of BMX.