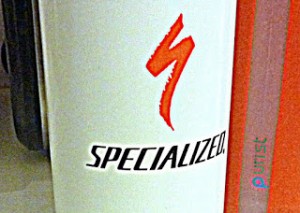 We’ve all probably had one. That bottle that no matter how much you washed it just wouldn’t seem to come clean or stop stinking like foot. If you’re lucky its just that this bottle seems to always taste like that energy drink you used a while back. Whatever it is; your average water bottle has a tendency to become “funky”.

The solution: replace it – you will likely never get that stain or stink out. However, while we used to have to settle for replacing the funk bottle with the same kind of bottle with the same propensity to get nasty. Specialized Bicycle Components has presented a solution though and I think it is a good one. 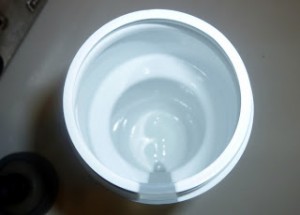 The Purist bottle uses an ultra thin (a few microns if that means anything to you…) layer of food grade silica to isolate whatever you’re putting in the bottle from the plastic it is made out of. This coating is basically like a thin layer of glass and addresses several things;

Let’s look at each of these points a little closer.
Your average plastic bike bottle often receives complaints about making water and other drinks taste like plastic. I don’t recall noticing this; so perhaps I’ve been drinking out of them for too long or I’m not sensitive enough, but either way I can see where this is undesirable. Since the Purist is essentially glass-coated it is more like drinking out of a glass – not flavoring your drink at all!
Additionally, these bottles can pick up the colors and flavors of some of the drinks that were in them before. I’ve had a few bottles turn a brownish color after I used them for iced tea in the summertime. Additionally, the flavor from a particularly “flavorful” drink will sometimes stick around for a few wash cycles, influencing whatever you may subsequently put in the bottle. This thin glass-like layer also helps prevent these conditions.
Finally, just like things rinse right out of a drinking glass – Specialized says you should be able to simply rinse out the Purist bottle with hot water and be ready to go again. I can say that I tested this for a little while with the first bottle I got – drinking everything from tea, to Hammer Recoverite and Perpetuem, to water and lemonade from that vessel without a single scrubbing or trip through the dishwasher. Not the most scientific test (nor potentially the most sanitary); but I can attest that I had no lingering flavors or coloring and didn’t even get sick! Good enough for me…
WATERGATE AIN’T JUST A HOTEL IN D.C.

Let’s talk quickly about the other new feature: WaterGate. (Will that get me some hits from political searches?)
The no-drip valve has been tried a few times with mixed results. Lately, the hydration system pioneer CamelBak probably had the best success with their Podium bottle. I tried the Podium, but found the valve action to be a little firm for my liking; taking too much effort to open resulting in a harsh stream of water with a similarly harsh closing action.
Specialized seems to have addressed this nicely as well. The WaterGate valve opens and closes more gently – a feature that I think cannot be truly appreciated until you compare the two. Additionally, it seems to live up to its no-drip promise. I have opened the valve and turned the bottle upside down and could seemingly wait minutes without a drip unless I squeezed the bottle. Push the valve down to its locked position and nothing is getting out – a motion that is identical to traditional bottles unlike the twist-lock motion of the Podium which requires you to learn a new habit to lock the bottle.

I also really like the “fuel gauge” – a streak of clear material that runs down the side so you can see how much and what is in your bottle (for those days when you have trouble distinguishing between the bottle with the water or energy drink…) For those of us who like bottles with some color as opposed to the clear ones; this is a nice feature I got hooked on with another bottle (which I’ll discuss in a moment) and was happy to see Specialized adapt.
LOOKS GREAT, BUT WHAT’S MISSING?

So, is the Purist the perfect bottle? Nearly. It addresses a lot of the issues many of us have had with our bottles for a long time. And, they’re slowly becoming the majority in my bottle collection. But; with all of the thought that went into these bottles they seemed to miss one important item: grippy bumps.When Trek re-vamped their bottles a few years ago and added these relatively big bumps to their bottles; I fell in love… and the Trek bottles quickly became my favorites. Truthfully, while working at a Specialized dealer – I would drive 10 minutes to the Trek dealer to buy those bottles at full price because of these bumps.  You see; on a cold and wet day those bumps make the bottle much easier to get out of the bottle cage without fumbling and potentially dropping it.Specialized has had some tiny bumps – just shy of a lightly textured surface – on their bottles for some time but nothing on the scale of the Trek bumps. So – if you’re reading; Specialized – the absence of even these little bumps is a mistake on the Purist bottle. If you think of adding them back; go a step further and make them bigger and you have the perfect bottle! 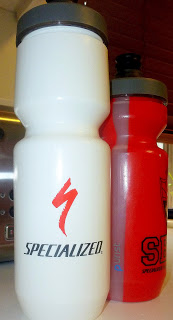 Do you have a Purist bottle? What do you think? Or, tell us about the nastiest, funkiest bottle you’ve had or seen…