Something I didn’t mention in my Trek World report on Bontrager, which you’ll see more of in 2009 is Bontrager’s new saddle line. The first two models, R (Race) and RL (Race Lite) came out in the middle of the 2008 model year with the range-topping RXL (Race X Lite) coming out soon.

“So, what’s really new in saddles that Bontrager could have discovered…isn’t this really just the same song, second verse?”

At first look, you might think this. Bontrager’s been doing saddles for a while and not really settled on any one distinct, definitive technology or characteristic to make them truly unique. And now, just like a lot of other top saddle companies; they’re doing saddles in multiple widths – nothing new, right? Wrong.

The multiple widths is just a portion of what Bontrager has discovered in their research to make saddles more comfortable for more people. The other part of this is to have the correct arc to the saddle to support your sit bones, allow the proper amount of contact area, and then stay out of the way. So, each saddle does not only have a unique width and profile; but also a unique arc to the back portion of the seat. Ultimately, the idea is that a center cut-out section will not be necessary because you are sitting above the body of the saddle more; rather than on the body of the saddle. I’ll admit – I was intrigued. 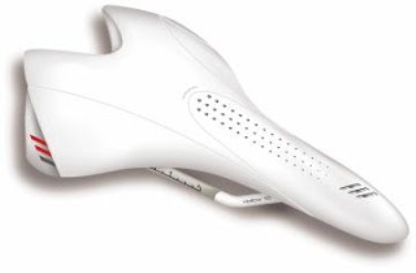 So I got one. Truthfully; I was given one – at Trek World – after being measured by a Trek employee for the proper width; I was given a InForm RL saddle in trendy white with silver trim.

Now, some history. I’m a die-hard cut-out saddle rider. I currently own 4 Selle Italia cut-out saddles and have ridden somewhere between 15,000 and 20,000 miles in great comfort on these saddles. The Flite Gel Flow has become my favorite saddle of all time and I’m a huge fan of that cut out. But when something comes along that claims to make the cut-out not necessary, my ears perk up and I get curious. So I have to test this out. END_OF_DOCUMENT_TOKEN_TO_BE_REPLACED