Part of a series I’m calling Tires 101 with lots of great info to consider when looking for new tires.

CHOICES, CHOICES…
Our choices in the tires we ride are possibly among the most subjective we make. There is often very little empirical data (except maybe price…) that is involved. More commonly our “data” is along the lines of “my buddy says they’re the fastest tires he’s ridden” or “she said she didn’t get flat tires for a year”. When you really stop and think about it though – there is a lot of highly personal variables involved in those statements. Let’s cut through the clutter.

I’ve long admired cyclingnews.com’s James Huang’s technical writing and referred to it often as the best in cycling journalism (although – VeloNews has really stepped it up lately). 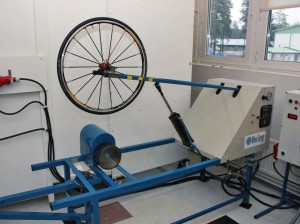 One of his latest pieces highlights a tire testing facility in Finland that seems to finally be coming up with some good data on tires in real-world type scenarios and less-so in the controlled laboratory conditions of older tests. The article has some fascinating facts and data; confirming some long-held thoughts and theories of my own and surprising me on a few areas that I had accepted as fact which it seems were not.

-Puncture resistant tires are typically slower, but to different degrees depending upon the stiffness of the material used. Again, based on tire deflection.

-Lighter inner tubes are faster. Lower weight at the periphery of the wheel lessens the moment of inertia and amount of effort required to maintain speed – the same as with lighter tires.

NOW – THE SURPRISES:
-Higher thread-count tires aren’t always better. What’s simple to understand is they are more susceptible to cuts because of the thinner threads. But, a medium thread-count tire may actually roll faster because the casings are less supple and deform more efficiently. Add their increased cut resistance and they’ll make good every-day tires. Still though, consider that while thread count decreases, puncture resistance will increase at the expense of speed.

-Tread pattern matters on the pavement too! Whoa! I get this off-road; it makes sense. But I’ve always thought of tread patterns and siping on road tires as “negative spaces” in the tread which would limit the tire’s ability to conform to the imperfections of the pavement. This in theory increases adhesion with the pavement. Not necessarily so…some patterns will increase adhesion. I now wonder how much this has had to do with tires I loved and hated…

Finally – they may have put one of the greatest industry arguments of the last decade to rest: 29″ MTB wheels do roll faster than their 26″ counterparts! I however still feel that some 26″ geometries allow for better agility, but it may only be a matter of time before someone proves me wrong there too…